Are you passionate about passions? Then you’ve probably spent Easter listening to Bach’s St Matthew Passion. Or, if you’re the kind of person who likes to impress people with his maverick musical taste, Bach’s St John Passion, Handel’s Brockes Passion or Beethoven’s Christ on the Mount of Olives.

And if you truly don’t care about what other people think of you: A Passion Play by British prog rockers Jethro Tull.

Forgive them, for they know not what they do.

Me, I chose David Lang’s The Little Match Girl Passion this year. The piece is barely ten years old, but already a bit of a classic. I liked it so much, I’m ready to spread the word.

You probably already know this fairy tale by Hans Christian Andersen, about a little girl who is forced by her father to sell matches on the street, fails to do so, is afraid to go home and starts to hallucinate.

Don’t’ worry, there’s a happy ending: she’s reunited with her loving grandmother … by freezing to death. 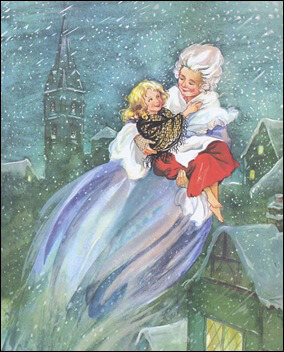 I never really liked this story, because I find it a bit too sentimental for my taste. Seeing as I cried when I first saw Jack die in Titanic, that’s saying something.

Of course, it wouldn’t be the first brilliant musical setting of a schmaltzy text. Besides, David Lang is a less shallow reader than I am. In the little match girl story, he sees a parallel with the passion of Christ. Not only do both Jesus and the girl suffer, they are also both scorned by the crowd and transfigured by death.

This thematic parallel is why David Lang chose to compose the little match girl story as a passion, alternating between:

The music is a minimalistic affair, with only four voices and percussion. Don’t expect dramatic timpani or excited drumming – we’re talking about a few accents by a lonely sleigh bell or glockenspiel.

Oh, wipe that smile of your face. There’s nothing funny about a glockenspiel.

The melodies and harmonies are just as sober. Lang builds his composition out of a few simple musical cells which don’t evolve but repeat themselves over and over again.

But it works. For me at least. And remarkably, the numbers where he recites the story make the biggest impression on me.

In a baroque or classical passion, oratorio or opera, these recitatives are the places where you can doze off for a moment – waiting for the next aria or chorus to come along.

In Lang’s The Little Match Girl Passion, these narrative fragments start out quite emotionless and monotonous. But soon Lang subtly raises the tension by introducing countermelodies, shifting the position of the voices so they create irregular rhythms, and so on.

To me, that echoes the girl’s descent into madness and despair. Until order returns when she’s found dead in the snow – definitely not rising again. A bitter, but beautiful climax.

Another great thing about this passion is that its story takes place on New Year’s Eve. So you can use it as a backdrop to your Easter and Christmas festivities. There are a few decent performances on YouTube. But the first and definitive version is the one by Paul Hillier’s Theatre of Voices, available on CD, Spotify and Apple Music. Enjoy!